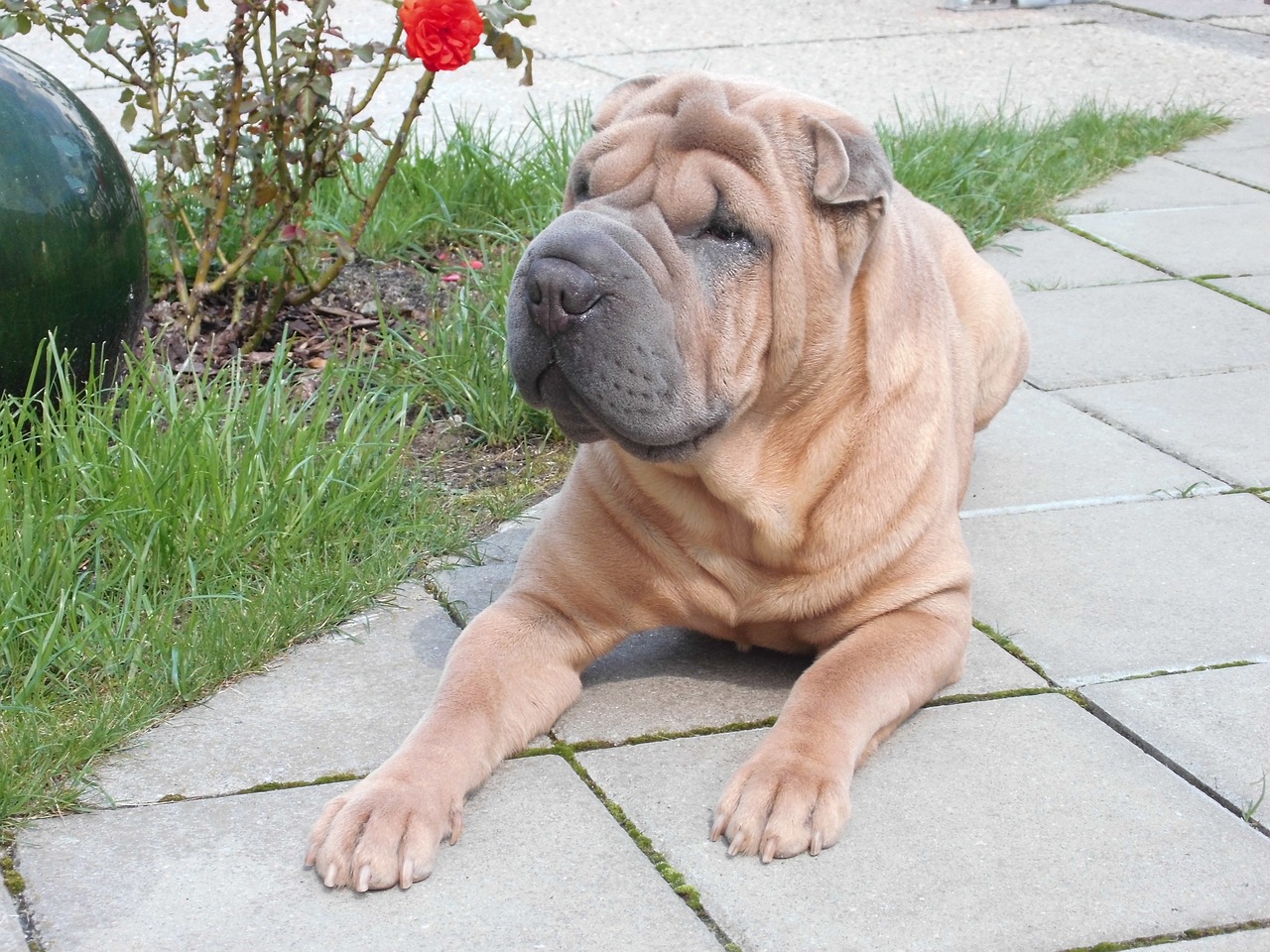 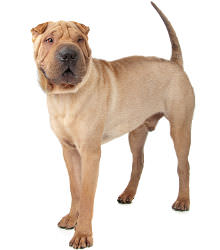 The Shar Pei is a very sensitive dog who has preserved his original character to this day. Typical of a molosser, he is a calm and confident dog. Basically, the Shar Pei is friendly and intelligent, but needs consistent and loving education to become an unobtrusive companion. He feels comfortable in his family and can be cautious and suspicious of strangers.

The Shar Pei has its historical origin in the southern provinces of China, sources suggest the origin of the race in the period of the Han Dynasty (206 BC to 220 AD). The Shar Pei was a dog of the poor rural population, especially farmers used him as a guard dog for home and yard. Also as a shepherd or hunting dog he found sometimes use. While the Shar Pei was then widespread, the original Shar Pei was almost extinct in the mid-1950s. The Hong Kong-born breeder Matgo Law stated in the early 1970s that only about a dozen dogs of the Shar Pei breed live in the world.

In 1972, the Shar Pei was first presented as a breed, in 1976, the breed was considered the rarest breed of dog in the world, only 145 animals were counted. In 1979, the first specimens of the breed came to Germany, quickly followed by other imports from Hong Kong or the United States. In the 1960s, Matgo Law and Chung Ching Ming created the conditions for the Shar Pei, as it is known and popular today. However, today's Shar Pei shows significant differences compared to the original breed: Although the hard hair, the curled tail, the triangular ears and the blue tongue have been preserved - but the physique of today's Shar Pei has a smaller body size, the head is more massive also bigger.

The most important features of the breed are the clearly visible folds or skin flaps, which occur more frequently in the head, withers and tail. The widely used term "Chinese fold dog", however, does not correspond to the original name "Shāpí Gǒu", which means freely translated "sand skin dog". According to FCI standard, the Shar Pei is up to 51 inches tall. Conspicuous are tongue, gums and palate, which are blue to blue-black. The hair of the Shar Pei should be short, rough and bristly, according to the breed characteristics of the FCI. All uniform colors are allowed, except for white.

The tail of the Shar Pei should be worn over the back or to one side of the body and rolled tightly. The wrinkles are also defined in the FCI breed characteristics: they should fit snugly on the dog's body and be relatively pronounced. While the puppies still have a lot of wrinkles distributed throughout the body, adult specimens should show only on forehead and withers occasional wrinkles. Today, two types of Shar Pei are also distinguished. The "bone mouth" -Shar Pei, which corresponds more to the original dog type and the so-called "Meat Mouth".

One of the typical diseases of the Shar Pei is the skin disease idiopathic mucinosis - a suspected genetic disease that leads to the deposition of glycosaminoglycans in the dermis. As a result, the skin feels very doughy, it can also cause pustules and itching. An occurrence of FSF (Familial Shar Pei Fever) and amyloidosis is not excluded. Physiologically, the Shar Pei has red blood cells that are reduced in size (microcytosis). As mentioned in the section "Origin and History", Shar Pei's gene pool is very limited - so breeders are called to show a strong sense of responsibility. Associations and breed societies strictly control which animals appear suitable for breeding.

The Shar Pei appears calm and relaxed. He is intelligent and eager to learn, but still keeps his own will. It is adaptable and is well suited for families with children - of course, provided a socialization. Since each Shar Pei has a very individual character, he can fit into almost any living environment. There are very sporty specimens that accompany their owners jogging or cycling and those who are happy with walks and quieter employment. A breeder can often recognize certain traits already in the puppy age and searches for his puppies the optimal living environment. The Shar Pei is alert, but not barking. At times he can show himself suspicious and reserved to strangers.

Interesting is the breed-typical water shy of the Shar Pei - there are few specimens, who voluntarily swim and go swimming.

The original Shar Pei was primarily considered a reliable watchdog. But also in the hunt for small game, he came increasingly used, the hunting behavior can therefore still be pronounced today. However, today's Shar Pei is not bred with the goal of being used as a guard or hunting dog. Meanwhile, the Shar Pei is considered a quiet and adaptable companion dog.