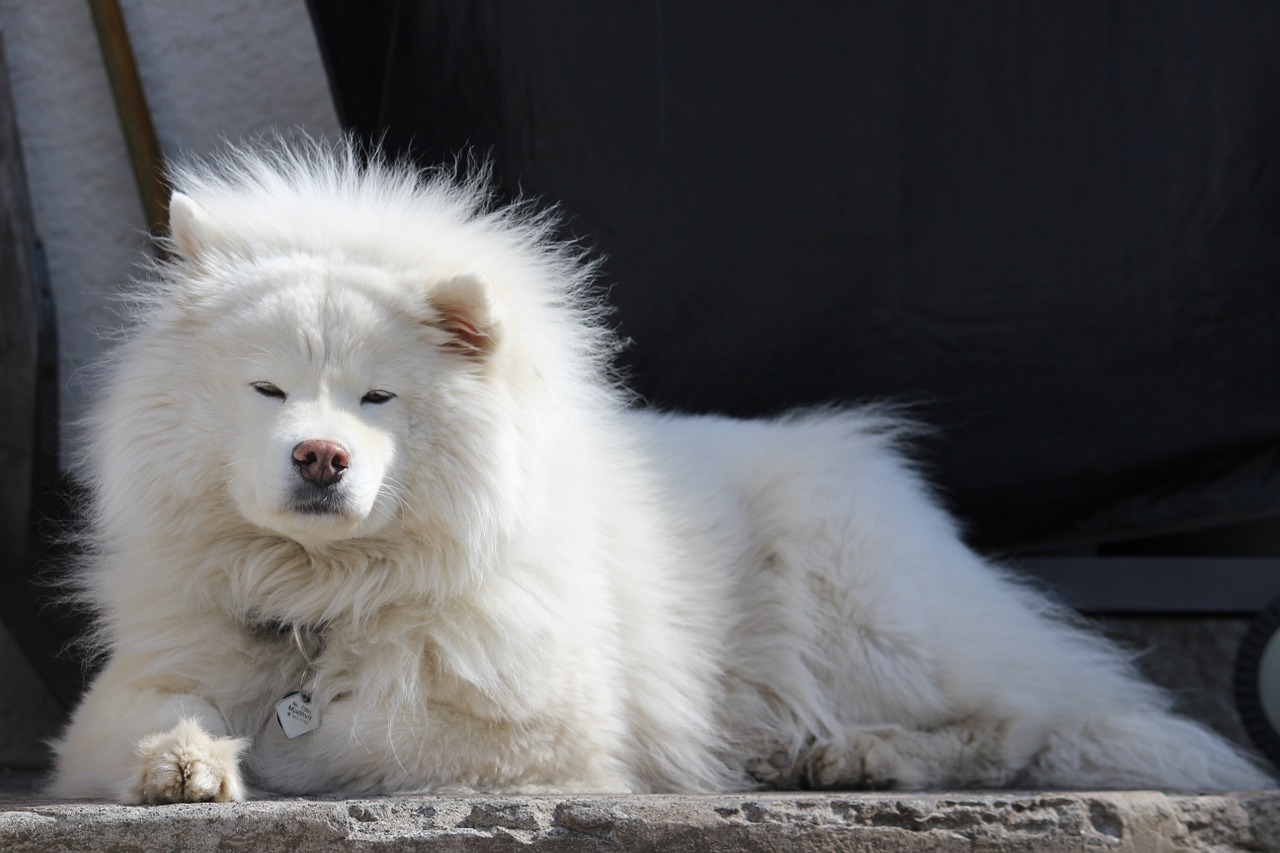 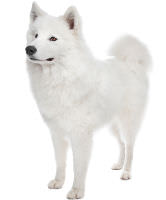 With its magnificent white coat, Samoyed, also known as Samoiedskaia Sabaka, is one of the most popular sled dog breeds. He is usually open-minded, happy and spirited towards humans, but also tends to be self-willed on occasion. The Samoyed needs a lot of exercise and also mental capacity, so it fits best to very active people. If consistently educated, he becomes a devoted family dog, yet always retaining his strong character.

Samojede owes its name to the North Siberian nomadic tribe of the same name, who used the ancestors of this breed several centuries ago as draft and work animals. Also in the hunt and in the protection of reindeer herds were the Northern Siberian sled dogs of importance. At the end of the 19th century, British zoologist Ernest Kilburn Scott brought the first puppy to Europe after a three-month stay. It was soon followed by other animals that laid the foundation for Samoyed breeding in Europe. The first breed standard for the Samoyed was set in England in 1909. The frugal and perennial dogs were then repeatedly successfully used for North and South Pole expeditions.

The Samoyed belongs to the group 5 "Tip and dogs of the original type" and therein to the section 1 "Nordic sled dogs". According to this standard, the ideal height at the withers is 57 cm for males and 53 cm for females with a tolerance of 3 cm. The Samoyed is bred in white, creamy white and white with biscuit-colored badges. Characteristic of the breed is the dense, white coat, which forms a framing mane at neck and shoulders. On the head and legs, the hair is short, on the back of the thighs it forms the so-called pants. The tail should also be covered with hair.

The Samoyed has a strong wedge-shaped head, which is slightly arched and has a barely visible indentation between the eyes. The stop is not overly pronounced, but clearly recognizable. The Samoyed has a characteristic smiling facial expression, which results from the oblique approach of the eyes. The smiling expression is further enhanced by the slightly upwards pointing lefthand angles. The eyes are dark brown in color, almond-shaped and relatively far apart. The catch is deep and strong, with a straight nose bridge. He gradually tapers to the nose. The Samoyed has small, upright ears of triangular shape. They are set high and wide and slightly rounded at the tips.

The Samoyed has a strong, proud and upright neck of medium length. The back is straight and muscular. He appears medium length and in bitches in comparison a little longer. The breast is wide and deep; it reaches almost to the elbows. The ribs are well arched, the lower profile line moderately raised. The Samoyed has short, clearly defined loins, which appear very strong. The tail is set high and reaches at rest to the hocks. The limbs are well muscled with sloping shoulders and low hocks.

The Samoyed is a lively, affectionate and open-minded dog full of energy. The fact that he originally served as a pure workhorse in his Siberian homeland is still demonstrated by his pronounced urge to move. The Samoyed wants every day enough busy and much to be moved, mentally, the intelligent Samoyed needed a demanding job. With its robust and weather-resistant physique, the Samoyed prefers to stay outdoors. However, if he is sufficiently moved, he can also cope with a housing position. An attitude as a big city dog, without enough large freewheeling areas and opportunities for extensive races, however, makes the Samoyed rather difficult.

Like his Siberian ancestors, the Samoyed is a pack animal and thus a very sociable dog, who regularly seeks to be close to his people, but often goes his own way. He shows how other sled dog breeds also, a self-confident and often almost self-willed behavior, which requires a consistent education by an experienced keeper. In addition, he has received an innate hunting instinct, which is relatively easy, but especially in the wild comes to light.

Use of the Samoyed

Among the sled dog breeds, the Samoyed today became the most popular family and companion dog, owing mainly to its small size and appealing appearance. With his magnificent coat, he is also one of the popular exhibition breeds. Since he has a very spirited and obstinate character, but he is neither a beginner dog nor suitable for people who can muster only little time for him. He wants to be extensively moved and engaged every day. The luscious coat of Samoyed also requires regular and intensive care.

To this day, the Samoyed is also used as a sled dog and in dog sports, although he is less vigorous and fast than other sled dog breeds. The Samoyed is a very friendly and open-minded dog. For this reason, it is less suitable for protection or security.