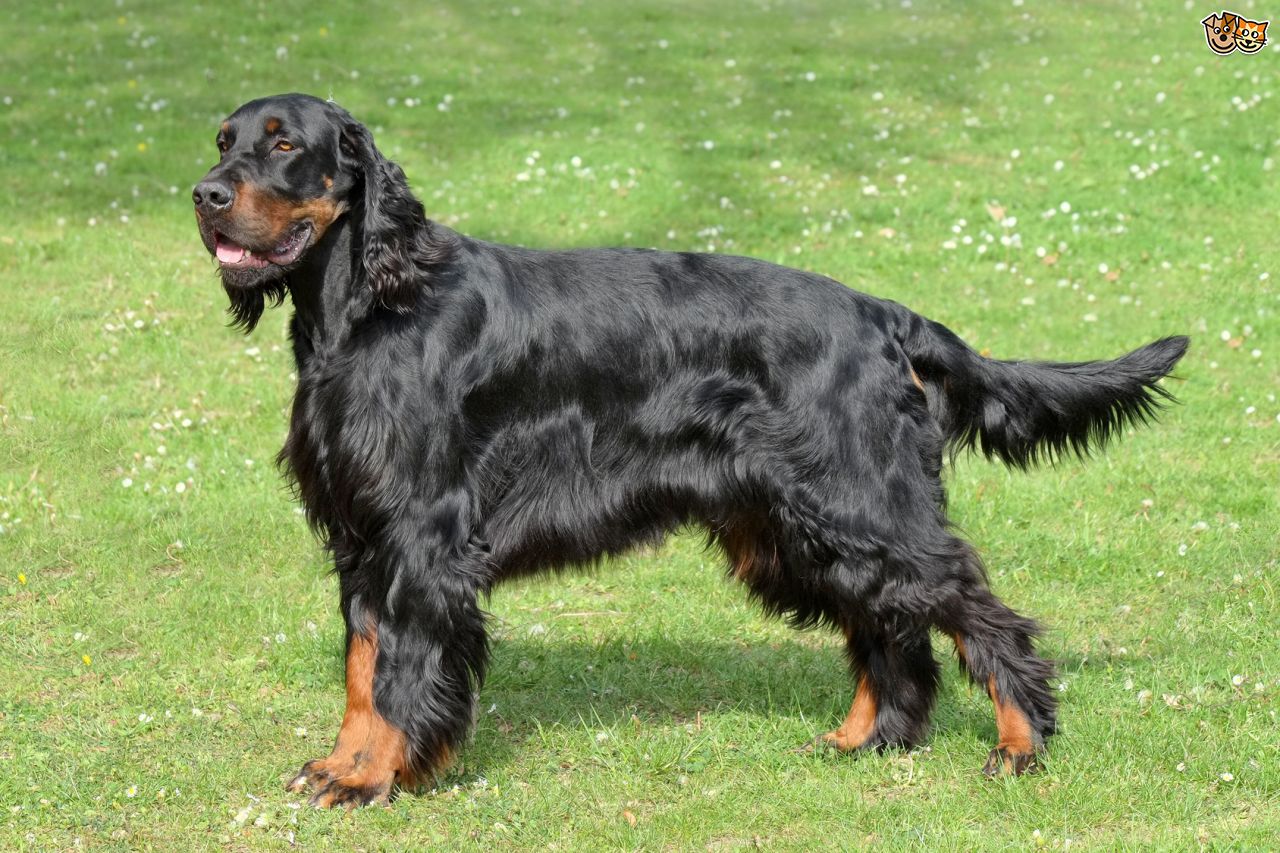 By his Beutegreifhemmung in combination with a pronounced hunting passion, the Gordon Setter is predestined for the hunting of feathered game. He keeps his search for some distance from the thunderstorm hunting and remains quiet here, without bothering something, pointing the nose towards feathery game. This indicates a very intelligent dog. The Gordon Setter attaches himself very strongly to his owner and shows himself balanced and amiable. So it can also be used as a companion dog. In any case, he needs considerable attention, a high level of education and plenty of room to let off steam on a daily basis.

The roots of the Gordon Setter go back to the English Middle Ages, when after the Norman Conquest the hunting sport became indigenous to the island kingdom. Here it was the "setting dogs", which were used for the feathered game hunting and optimized for it. This is how the Irish Setter, English Setter and the Scottish "Black and Tans" named Gordon Setter were created before the 18th century. By crossbreeding different breeds like the Landspaniel the breed picture of the Gordon Setter was consolidated. In particular, Alexander, the fourth Duke of Gordon, made the breeding and development of this breed to merit. A crossbreeding of Collies is said to have contributed to the improvement of the fur characteristics of the Gordon Setter, but is not officially confirmed. At that time there was a white badge on the chest of the Black and Tan setter. This has been undesirable since the Kennel Club was admitted to the breed in 1873. From 1924, the pointing dog then got its name Gordon Setter, known to this day.

Racial features of the Gordon Setter

The Gordon Setter belongs with a withers height of 66 centimeters in the approximately 25 to 35 kilograms male and 62 centimeters in the bitches, with a weight of about 20 to 30 kilograms, to the larger dogs. He has extremely elegant, perfectly matched proportions. Often its appearance is compared to that of a hunting horse. The long, curved neck with upright, strong neck make it look even bigger. A dew, that is, a skin fold filled with fatty tissue, does not occur here. The catch of the Gordon setter is very long drawn from the nose sponge to the stop, which is clearly pronounced in this breed, and also the skull shows a considerable length up to the occipital bone. The nose sponge is strong and has wide open nostrils. The drooping ears, which are also called Behang, are close to the head. They are hairy in the upper part. The powerful teeth are arranged in a scissor shape and includes 42 teeth. Over it lie the dark brown eyes, which can look attentively, determinedly or expectantly, always displaying a watchful expression.

The body length of the Gordon Setter exceeds the height at the withers minimally. His narrow, almost to the elbow-reaching chest and the ascending line from the lower breast to the abdominal area indicate a persevering, elegant runner. The front paws have well-marked toes and bales and ample hair in the front area. Ideal for big jumps are the strongly muscled hind legs with powerful hocks. All characteristics together create a harmonious movement, whose movement sequences are particularly graceful at gallop. The tail is carried horizontally or slightly sickle-shaped.

The almost curly hair is medium in most parts of the body. In short she is only on the head and in some places of the runs. In terms of color, a deep black with a silky shine dominates. Around the underside of the catch and the front of the neck, as well as on the insides of the barrels, a chestnut-red band draws.

One of the most notable features of the Gordon Setter is the projection. Hunting dogs, in which this ability is innate and perfected by selection and training, track down the game. As soon as they have absorbed the weather, they silently freeze their posture and, with their nose snatched out, point precisely in the direction in which the poultry hides. Typically, they also lift an anterior paw angled. After the game has been frightened and the hunter has fired the shot, it will reliably retrieve the Gordon Setter.

The likeable friendly Gordon Setter has a balanced character. However, his nature requires a high level of movement, employment and attention. To guide this energy as well as its hunting instinct into paths, an extensive education program is necessary. However, due to his excellent perceptions, he will pass the training with flying colors if the instructor is suitable. In addition, the Gordon Setter establishes a very deep relationship with his owner. Although he is not aggressive towards strangers, he still does not appreciate it when they approach him too much. Therefore, a change of environment and the owner causes him some difficulties.

Use of the Gordon Setter

As a pointer, the primary usage of the Gordon Setter is of course hunting. Here he is persistent and uses his intelligence to adapt independently to different environments and situations. The hunting instinct is also an important part of his being, which always requires an experienced, lovingly dominant keeper. Since the Gordon Setter is very human-related, he is certainly suitable as a family dog. However, an attitude in the urban environment is hardly suitable for satisfying his need for movement. It must also be remembered that the Gordon Setter needs his extensive daily spouts in any weather - and he can be due to its breeding for outdoor use in any weather outside easily.