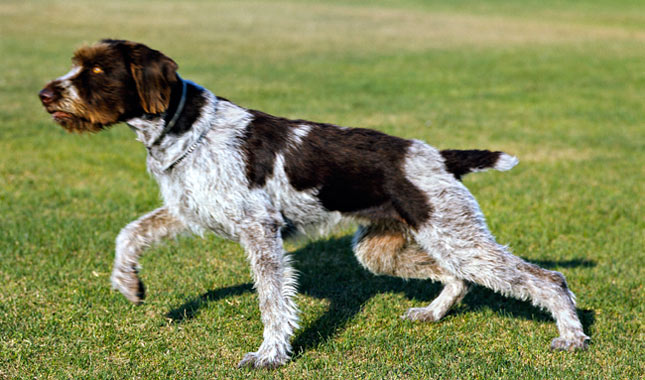 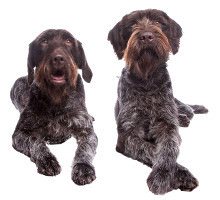 Specially bred for hunting, German Wirehaired Pointer has all the positive qualities of a versatile hunting dog. He is well balanced, robust and persistent, learns fast and has an excellent sense of smell. The German Wirehaired Pointer can be used for almost all tasks, from retrieving to welding work, and is also vigilant in the home environment. Despite his relatively obstinate nature, he builds a close bond with his owner, as well as with the whole family.

The German Wirehaired Pointer was bred since the end of the 19th century with the aim of creating a German -born, capable and hunting dog. The basis of this breed standard was served by the ideas of the hunting cynologist Sigismund von Zedlitz and Neukirch, who are known under the pseudonym "Hegewald". This is how German Wirehaired Hair was created by crossing already existing rough haircuts, such as the Griffon Korthals, the German Stichelhaar and especially the Pudelpointer. In addition, the German Shorthair was finally crossed. In 1902 breeders founded the association Deutsch Drahthaar; the standard for the breed was then set in 1924. At the same time he attested the achieved breeding goal of a versatile and weatherproof hunting dog.

According to this standard a withers height of 61-68 cm in males and 57-64 cm in females. The German Wirehaired Pointer has a noble appearance and a spacious, powerful and fluid movement. The coat is, as the name suggests, wiry and hard. It lies close and is interspersed with dense undercoat, which gives it a good weather resistance. The German Wirehaired Pointer is bred in the colors brown, brown-black and black-gray. In the latter, so-called plates may occur, in brown animals a white breast spot.

The German Wirehaired Pointer has a flat skull with slightly divergent headlines. He is also slightly rounded on the sides. Stop and eyebrow arches are pronounced. The catch is long, broad and strong with a slight Ramsgate - a name for a strongly curved bridge of the nose. The eyes have a vivid expression and should be as dark as possible. Furthermore, the German Wirehaired has medium-sized, high set and wide ears. The neck is strong and well muscled. The upper profile line is straight and drops slightly towards the croup. This is both long and wide, equipped with a strong muscling and goes into an equally wide basin over. The withers are pronounced, the back firmly and well muscled.

The German Wirehaired Pointer has a deep and broad chest with a pronounced forechest. The ribs are well arched, the sternum reaches far back. Furthermore, the German Wirehaired has straight, parallel runs with strong muscled shoulders, well bent knees and powerful hocks. The tail follows the back line. It is worn horizontally or slightly raised. Hunted dogs have a cropped tail. Prerequisite for the permission to deregister is, among other things, a hunting license of the future owner and the breeder, the descent of also hunting and tested parent animals and only on the premise that it is essential for the use of the animal.

The German Wirehaired Pointer was bred as a pure hunting dog and still has all the essential characteristics for this form of use. He is a stable, balanced dog who shows no sensitivity to shooting or wild shit after successful training. He appears masterful and at the same time energetic, works hard and, thanks to his weatherproof hair coat, copes well even with adverse weather conditions. In addition, the German Wirehaired has an excellent sense of smell and shows a special preference for water. He learns willingly and quickly, shows a watchful demeanor, but sometimes appears stubbornly.

The attitude is not very easy - his pronounced urge to move and hunting drive, which are already clearly recognizable in young dogs, should not be underestimated. However, if he is allowed enough exercise and his hunting passion used or steered in the right lanes, he is also satisfied with a modest home.