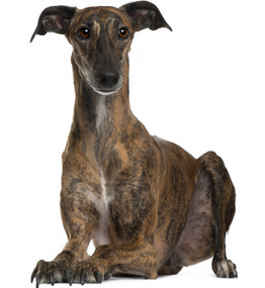 The Galgo Español is, typically greyhound, outdoors a lively, agile and runny dog. In the house, however, he behaves quietly and unobtrusively. Basically, he is friendly, but can be reluctant to strangers. To his keeper, however, he builds a deep relationship, is affectionate and shows great willingness to accept an education that takes into account his sensitive nature.

Little is known about the origins of the Galgo Español. However, if it is true that his ancestors are seen in ancient races of Asian greyhounds and the Galgo was already brought to the Iberian Peninsula by the Celts, its origins date back to the fifth century BC. His name, however, is of Roman origin. He was called Canis Gallicus, ie Gallic dog, which became "Galgo". In times of Moorish rule, crossings with the Sloughi and the Podenco Ibicenco were added, until it can be seen in illustrations from the 12th century in roughly the same way as he was bred purebred until the 19th century. The Galgo Español is one of the ancestors of the greyhound, an English greyhound. In the 1930s, however, these breeds were crossed again and again to produce more efficient offspring for dog racing. This still makes it difficult for the layman to distinguish between the two races.

The elongated head with barely visible forehead or stop is more pronounced at the Galgo Español than the Greyhound. More important than other breeds is the depression in the skull between the eyes. The small, oval eyes benefit the Galgo Español during hunting with visual contact, because they are arranged slightly laterally offset and allow a good all-round view.

The long, almost straight up, slim but strong neck contributes to the elegant appearance of the Galgo. At the center of his graceful appearance are the long forelegs and hind legs. Both are very filigree and dry. That is, muscles, tendons and in the hindquarters also the bones are clearly visible under the skin of the fully erect limbs. The side view shows an imposing chest, which is pulled down deeply, but the elbows are not reached. As typical for a greyhound, the ribs are strongly pronounced and indicated visible, which should not be confused with malnutrition. The belly is accordingly slim and raised.

The Galgo Español carries his tail hanging. It is set very low and about 50 centimeters long so that it would reach almost to the ground, it would not be formed in the lower third of a sweeping, often in a semicircle laterally upward bow. With a withers height of up to 70 centimeters leaves the Galgo Español already from afar an impressive impression. Despite its considerable size, it only reaches a weight of 30 kg with its slim body, but quite large tolerances are possible here. Small bitches can also have a stick size of only 60 centimeters at 20 kg body weight.

The coat can occur in many different shades. There are two varieties led, one of which has a very short, smooth top coat without undercoat and the second shows a slightly longer, harsh roughhair.

The Galgo Español basically needs a lot of exercises. Due to its pronounced hunting drive, however, the freewheel can be difficult. However, in wild areas and with appropriate education, he can live out his urge to move well and reach short-term maximum speeds of up to 80 km / h. In the house, however, the Gaglo Español is typically greyhound-type, quiet and almost inconspicuous, blending harmoniously into family life.

However, his character also requires an innate caution. He shows a distanced behavior towards strangers but is not aggressive. On the other hand, the Galgo Español is very affectionate and dependent on the constant contact with its owner or his human family and needs a loving and consistent leadership. With appropriate education and socialization, he is also well suited for living together with children, even if dog and children, of course, should never be left unattended.