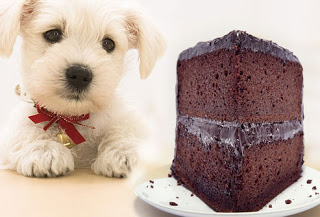 There are a lot of “people foods” your dog should never eat and it has nothing to do with his waistline. In fact some are downright dangerous for him and this list may surprise you.

Reaction to a drug prescribed for humans is the most common cause of poisoning in dogs. Just as you would do for your children, keep all medicines out of your dog’s reach. And, never give your dog any over-the-counter medicine unless your vet tells you to. Ingredients such as acetaminophen or ibuprofen found in pain relievers and cold medicine can be deadly for your dog.

Most people know that chocolate is bad for dogs. The toxic part is theobromine. It’s in all kinds of chocolate, even white. The most dangerous kinds, though, are dark chocolate, chocolate mulch, and unsweetened baking chocolate. Eating it, even just licking the icing bowl, can cause a dog to vomit, have diarrhea, and be excessively thirsty. It can also cause abnormal heart rhythm, tremors, seizures, and death.

Alcohol contains ethanol which is toxic for canines.

Symptoms include staggering and your dog may also be confused. He may vomit, but this can happen only 1 to 2 hours after the ingestion of alcohol. If you notice that your dog has ingested alcohol, you should induce vomiting, to prevent the ethanol from being absorbed in the bloodstream.
High amounts can cause cardiac arrest and death.

Onions – powdered, raw, cooked, or dehydrated – can destroy a dog’s red blood cells, leading to anemia. That can happen even with the onion powder found in some baby food. An occasional small dose is probably OK. But eating a large quantity just once or eating smaller amounts regularly can cause poisoning. Symptoms of anemia include weakness, vomiting, little interest in food, dullness, and breathlessness.

5. Coffee, Tea, and Other Caffeine

Caffeine in large enough quantities can be fatal and there is no antidote. Symptoms of caffeine poisoning include restlessness, rapid breathing, heart palpitations, muscle tremors, fits, and bleeding. In addition to tea and coffee – including beans and grounds – caffeine can be found in cocoa, chocolate, colas, and stimulant drinks as well as cold medicines and pain killers.

Dogs shouldn’t eat macadamia nuts or foods with them because they can be fatal. As few as six raw or roasted macadamias can make them ill. Symptoms of poisoning include muscle tremors, weakness or paralysis of the hindquarters, vomiting, elevated body temperature, and rapid heart rate. Eating chocolate with the nuts will make symptoms worse, possibly leading to death.

Grapes and raisins have often been used as treats for dogs. But it’s not a good idea so don’t give your dog a slice of Christmas pudding as a treat! Although it isn’t clear why, grapes and raisins can cause kidney failure. And just a small amount can make a dog ill. Repeated vomiting is an early sign. Within a day, they become lethargic and depressed. The best prevention is to keep these off counters and other places your dog can reach.

The problem is the seeds or pits. The seeds from persimmons can cause inflammation of the small intestine in dogs. They can also cause intestinal obstruction. Obstruction is also a possibility if a dog eats the pit from a peach or plum. Plus, peach and plum pits contain cyanide, which is poisonous to both humans and dogs. The difference is humans know not to eat them. Dogs don’t.

Candy, gum, toothpaste, baked goods and some diet foods (including peanut butter) are sweetened with xylitol. It can cause more insulin to circulate through your dog’s body which causes his blood sugar to drop and can also cause liver failure.

Initial symptoms include vomiting, lethargy, and loss of coordination. Eventually, he may have seizures. Liver failure can occur within just a few days. Hypoglycemia is usually evident within an hour or two after a dog ingests xylitol, but symptoms are occasionally delayed for several hours. Treatment depends on how quickly it is given. Vomiting is induced in cases where the xylitol has just been ingested.

Table scraps often contain meat fat that a human didn’t eat as well as bones. Both are dangerous for dogs. Fat trimmed from meat, both cooked and uncooked, can cause pancreatitis. And, although it seems natural to give a dog a bone, he can choke on it. Bones can also splinter and cause an obstruction or lacerations of your dog’s digestive system. It’s best to just forget about the doggie bag.

There are two problems with giving your dog raw eggs. The first is the possibility of food poisoning from bacteria like Salmonella or E. coli. The second is that an enzyme in raw eggs interferes with the absorption of a particular B vitamin. This can cause skin problems as well as problems with your dog’s coat if she’s been eating them for a long time.
12. Salt

It’s not a good idea to share salty foods like chips or pretzels with your dog. Eating too much salt can cause excessive thirst and urination and lead to sodium ion poisoning. Symptoms of too much salt include vomiting, diarrhea, depression, tremors, elevated body temperature, and seizures. It may even cause death.

Before it’s baked, bread dough needs to rise. And, that’s exactly what it would do in your dog’s stomach if she ate it. As it swells inside, the dough can stretch a dog’s abdomen and cause severe pain. In addition, when the yeast ferments the dough to make it rise, it makes alcohol that can lead to alcohol poisoning.

Dog-and-garlic-cloves
Garlic is a member of the Allium genus (branch of the lily family, extremely toxic to dogs) and its safe use has therefore come under close scrutiny. One of its compounds (also found in onions) can in large doses cause oxydative damage to red blood cells, potentially leading to anemia and even death.
However a dog would need to ingest over 0.5% of his body weight to even start triggering that process (or several cloves of garlic for a dog over 25kg).

Please note that garlic should NOT be fed to pets with a pre-existing anemic condition, those scheduled for surgery or young puppies under 8 weeks.

15. Milk and Other Dairy Products

Some dogs have no problems digesting milk and dairy products. Yet others experience acute intestinal distress — like gas, diarrhea or vomiting — whenever they consume these kinds of foods.

Many kinds of cheese contain considerably less lactose than milk and can make a great natural treat for any pet.