Some Roadside Sweeper become the Savior for dog 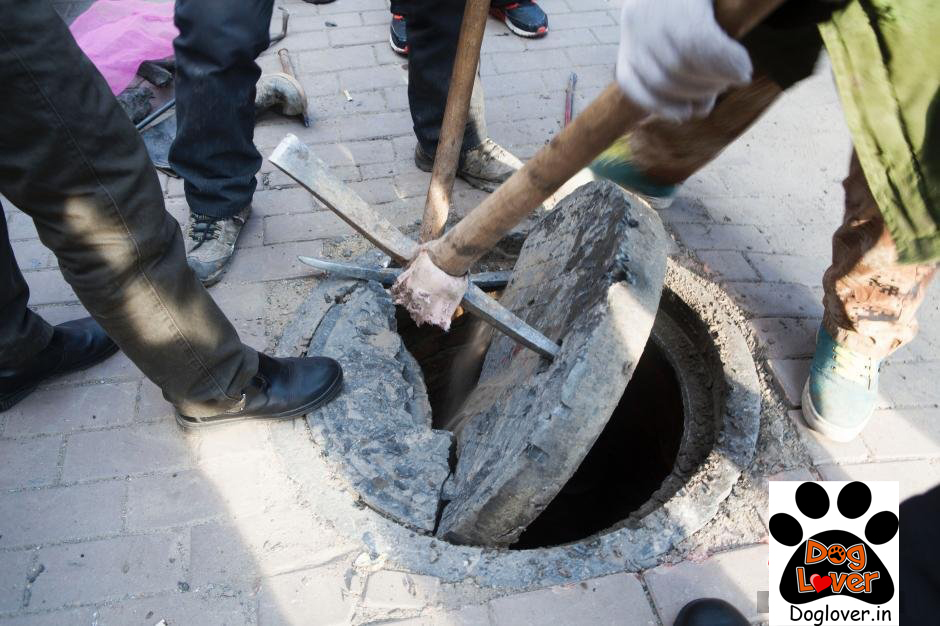 Monsoon is sucks here in India. Everywhere is water locked; the normal life of human beings as well as the animal gets stuck. Stray dogs are more sufferers due to this situation. The corporation is trying to drain out the water and engaged some sweepers also to clean the manhole so that the drainage system gets smooth soon.

Few days ago in Kolkata a pathetic incident took place but no media bother to telecast that. Near the Chowrangee more, everybody noticed a gathering in the morning near about 8 A.M. As you know Kolkata is a busy city so the office rush was there as usual. Actually the incident was like that, a stray dog accidentally fallen into an open manhole, screaming in pain and tried to survive there until some corporation sweepers came there. All the common passerby were came peeped into the manhole and left without saying anything as it was just a stray dog.

But the fact is animal also gets hurt, they also have the emotions, like a baby or kids have. The puppy stray dog was screaming at that scary moment, if anyone paid any attention then the situation couldn’t be the worst. The puppy dog got nervous; it was barking continuously as much as it can. In fact it tried to get out from the hole. But he failed every time because of the water flow. Somehow the dog was holding a small branch there in the hole so it was not so far from the open manhole entrance and that’s why the people were able to hear its voice. It was since morning to 11 A.M the dog was there and wail for getting out from there. But no one neither noticed its screaming voice nor tried to help out the dog from there. Until the sweeper went there to it and till that time also the dog was continuously barking as it was asking for help. But the rush was too busy to hear or help the dog. When the puppy saw the sweeper he started barking, just like a baby crying when he is in pain or trouble. At the moment of rescuing the dog, the sweeper took it on his lap, and then the puppy stopped barking. It was the realization that the dog feel the security, it felt its safety.

There was not much water to sink but the dog was too young to survive for a long time. Thanks to those sweepers, for whom the dog got its life again. When the sweepers came there near the drain hole, they hear the sound of screaming, they asked to the local shopkeepers and got to know that it was a dog which accidentally fallen there. Without delaying one of the sweepers put off his clothes and with the help of a big rope he slowly jump into the manhole and others were helping him by losing the rope so that the sweeper got into the deeper in the hole. And luckily their efforts worked out, the sweeper finally rescued the dog and both of them got out from there after few minutes. Some local people gathered there to become the eyewitness of that incident and some people appreciated the work of the sweepers by telling them good job!

When You See an Animal in Distress …

Though it was a great job but people don’t take this kind of works so seriously. That’s why so many stray dogs are still now suffered and without getting any helping hands they survive and then died. People should be more emotional towards them and should help them like their own pet. We are publishing this incident on our blog so that we can spread this news to you who are really a dog or animal lover.

If some sweepers can be the savior of dog then why not the dog lovers take this kind of initiative? Judge yourself!