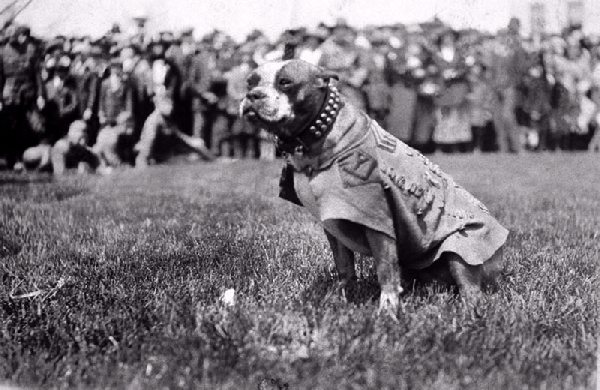 Sergeant Stubby (July 1916 – March 1926) was the most decorated war dog who served during World War I.

Though there is no official documentation, he’s also the only dog to have been nominated for rank and was promoted to sergeant through combat.

He was the official mascot of the 181st Infantry in the US and assigned to the 26th Yankee Division. Stubby dutifully served for 18 months and even took part in in seventeen battles on the Western Front. He saved his regiment from surprise mustard gas attacks, found and comforted the wounded, and he once caught a German soldier by the seat of his pants -sadly we could find no picture -, holding him there until American soldiers found him.

Back home his exploits were front page news of every major newspaper.

Stubby was referred to in the news as a Bull Terrier or a Boston Terrier. Describing him as a dog of “uncertain breed”, Ann Bausum wrote that “The brindle-patterned pup probably owed at least some of his parentage to the evolving family of Boston Terriers, a breed so new that even its name was in flux: Boston Round Heads, American Bull Terriers, and Boston Bull Terriers.”

Stubby was found wandering the grounds of Yale University (Connecticut) campus in July 1917 whilst members of the 181st Infantry were training. The dog hung around as the men drilled and one soldier, Corporal Robert Conroy, developed a fondness for the dog and named him Stubby because of his short legs.

When it came time for the outfit to ship out, Conroy hid Stubby on board the troop ship. As they were getting off the ship in France, he hid Stubby under his overcoat without detection.Upon discovery by Conroy’s commanding officer, Stubby saluted him as he had been trained to in camp, and the commanding officer allowed the dog to stay on board.

This surprise welcome is in stark contrast with the treatment meted out to Horrie the Australian War Dog in similar circumstances.

Stubby served with the 181st Infantry Regiment in the trenches of the French battlefront for 18 months and participated in four offensives and 17 battles. He entered combat on February 5, 1918 at the Chemin des Dames, North of Soissons.

He was under constant fire, day and night for over a month. In April 1918, during a raid to take Schieprey, Stubby was wounded in the foreleg by the retreating Germans throwing hand grenades. He was sent to the rear for convalescence, and as he had done on the front was able to improve morale. When he recovered from his wounds, Stubby returned to the trenches. He ultimately had two wound stripes.

In his first year of battle Stubby was injured by mustard gas, after he recovered, he returned to the front wearing a specially designed gas mask to protect him.

He learnt to warn his unit of mustard gas attacks, located wounded soldiers in no man’s land and — since he could hear the whine of incoming artillery shells before humans could — became very adept at letting his unit know when to duck for cover.

He was solely responsible for capturing a German spy in the Argonne. Due to his capture of the enemy spy, the commander of the 102 Infantry nominated Stubby for the rank of sergeant. However, whether Stubby was actually promoted or even an official member of the Army is still subject to debate.

Following the retaking of Château-Thierry by the US, the women of the town made Stubby a chamois coat on which were pinned his many medals. He also helped free a French town from the Germans. He was later injured in the chest and leg by a grenade. At the end of the war, Robert Conroy again smuggled Stubby home.

After returning home, Stubby became a celebrity and marched in, and normally led many parades across the country. He rubbed shoulders with a number of American Presidents .

In 1921 General John J. Pershing presented a gold medal from the Humane Education Society to Stubby, which was the subject of a famous photograph. 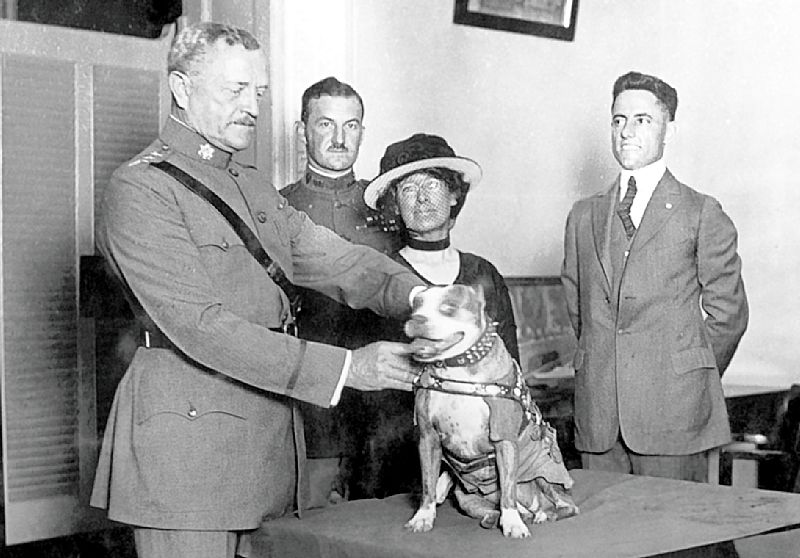 Starting in 1921, he attended Georgetown University Law Center with Conroy, and became the Georgetown Hoyas’ team mascot. He would be given the football at half time and would nudge the ball around the field to the amusement of the fans.

Stubby passed away in his sleep in 1926. After his death, his body was preserved with his skin mounted on a plaster cast, which was presented to the Smithsonian in 1956.

Stubby received an obituary in the New York Times following his death in 1926. The obituary was half a page, which was much longer than the obituaries of many notable people of the time period. 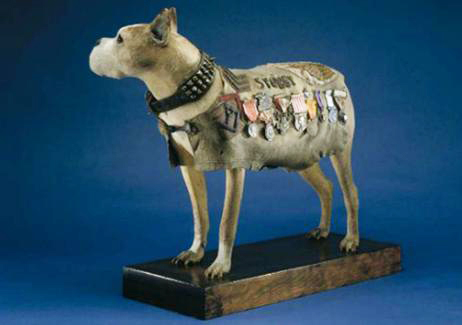 Stubby was the subject of a portrait by “Capitol artist” Charles Ayer Whipple. Stubby was featured in the Brave Beasts exhibit at the Legermuseum in Delft, The Netherlands July 18, 2008 – April 13, 2009. During a ceremony held on Armistice Day in 2006, a brick was placed in the Walk of Honor at the Liberty Memorial in Kansas City to commemorate Sergeant Stubby.
Stubby was the subject of at least four books. In 2014, BBC Schools World War One series used Stubby as a Famous Figure to help teach children about the war, along with creating an animated comic strip to illustrate his life.Stubby has his portrait on display at the West Haven Military Museum in Connecticut.